Who would have thought that the first Game of Thrones episode not to feature Tyrion would also be its best?  Not that “You Win Or You Die” was perfect, but the parts that didn’t work were few and far between and those that did were absolutely thrilling.  If the first six episodes were mostly build-up, this was the one where things started falling apart.  I could run down almost every scene in this episode and just gush about the awesome but, in the interest of focus, I’ll just look at how cleverly this episode reminds us of all the various ethics at play before finally letting them clash. END_OF_DOCUMENT_TOKEN_TO_BE_REPLACED

As every other review points out, this movie is nothing like Ang Lee’s ill-conceived Hulk movie.  This one is most certainly about “Hulk Smash”, and not “Hulk Brood,” containing the finest action sequences of any Marvel movie.  The final fight sequence, in which Hulk and Abomination tear through Harlem, is worth the cost of the disc alone.  It’s one of those scenes action fans will skip to when they’re looking for a quick-fix.  That isn’t to say that this is just a big dumb action flick.  Edward Norton does an excellent job as Bruce Banner, peaceful scientist and William Hurt and Tim Roth are only a few steps behind as the aging warmongers looking to exploit him. END_OF_DOCUMENT_TOKEN_TO_BE_REPLACED 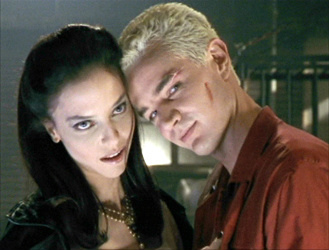 I’m reviewing “What’s My Line” Parts 1&2 in a single write up as (unlike some 2-parters) these episodes really do form a single unit.  It’s impossible to really appreciate what’s going on in one of them without seeing the other, and there certainly is a lot to appreciate.  Buffy chafing under her destiny is nothing new, but the scope of this episode is bigger than anything the show’s given us thus far and (for the most part) the execution is up to the ambition, mainly by delivering on the characters and relationships that have been built up in the season thus far and in providing new and intimidating threat for Buffy to face.   END_OF_DOCUMENT_TOKEN_TO_BE_REPLACED

This film suffers unfairly in comparison to its predecessor.  Iron Man’s second outing is certainly not as good as his first but the action scenes are still first rate and Tony’s desire to go out in a blaze of self-destructive glory is an interesting starting point for the character.  It’s his journey back that leaves a bit to be desired.  Efforts to tie Vanko’s hatred of the Stark family into Tony’s arc never really succeed and Mickey Rourke feels wasted in the role.  Justin Hammer is also a big misstep as the secondary villain as he’s just too ineffectual to seem threatening. END_OF_DOCUMENT_TOKEN_TO_BE_REPLACED

Do you wanna talk about it?

This just might be my favourite episode of Treme yet!  I think what fascinated me most about it was the conversation and lack of conversation between many of the characters.  Once again, what became most telling were the silences; this is good stuff.  I’m really enjoying the loud silences and the quiet conversations. Let’s break it down: END_OF_DOCUMENT_TOKEN_TO_BE_REPLACED

Tagged s2e04, Santa Claus Do You Ever Get the Blues?, Treme

“Fun” is the best word to describe Marvel Studios’ first outing, although it’s actually inadequate for a film of this quality.  “Iron Man” delivers all the slick action and wit you’d expect from a summer blockbuster, but it also features a tight plot, well-rounded characters and an outstanding performance by Robert Downey Jr.  This is a movie that delivers entertainment first and foremost but never sacrifices storytelling in the name of spectacle. END_OF_DOCUMENT_TOKEN_TO_BE_REPLACED

There is only one thing we say to death

Awesome.  Absolutely awesome.  Game of Thrones is, undeniably, the most ambitious genre-project television has ever given us and while I’ve enjoyed the series thus far, it hasn’t really lived up to that promise until now.  “A Golden Crown” brings this series into the same league as Dexter, The Wire, etc.  The show is still far too young to be equal to such giants, but it’s now officially bringing something new to the realm of serialized drama.  That something is explicitly leveraging the tropes of another medium in order to build plot and character.  Of course this isn’t the first television series to make use of the audience’s understanding of literature, but it’s the first one to make it a core concept.  Entertaining as this episode was in its own right, it’s brought to a whole other level by a familiarity with epic fantasy. END_OF_DOCUMENT_TOKEN_TO_BE_REPLACED

Fools making it up as they go along

This episode of Treme was particularly heavy and I’m not sure how I feel about it.  One comment I’ve found on a number of tv related blogs is that the pacing was too fast to give the proper amount of focus to the more serious elements.  I tend to agree.  It seemed like we were in for another character building episode of fast-paced scenes, when all of a sudden, we have a normal-paced rape-scenario.  Let’s talk about that, shall we? END_OF_DOCUMENT_TOKEN_TO_BE_REPLACED

Tagged On Your Way Down, s2e03, Treme

I’m so used to you being a grown up

“The Dark Age” is one of the episodes I remember most from my initial viewing of Buffy, not because it’s particularly great, but because of how deftly it expands the characters and world of the show and (I’ll admit) because I’m a huge Giles fan.  Until now Rupert’s done the heavy lifting in making the exposition seem credible and served as a straight-laced foil for Buffy’s teenaged rebellions.  END_OF_DOCUMENT_TOKEN_TO_BE_REPLACED

The plot is simplistic drivel, has a twist that’s rather nonsensical, and is in no way related to the first film… but that’s not really why any of us watch this, is it?  We watch it to see Tony Jaa doing things we didn’t think were humanly possible.  Anyone familiar with his work will appreciate this film as his most visceral, polished, epic, and astonishing to date.  Anyone not familiar should consider whether they’re interested in seeing the heir-apparent to Jet Li. END_OF_DOCUMENT_TOKEN_TO_BE_REPLACED