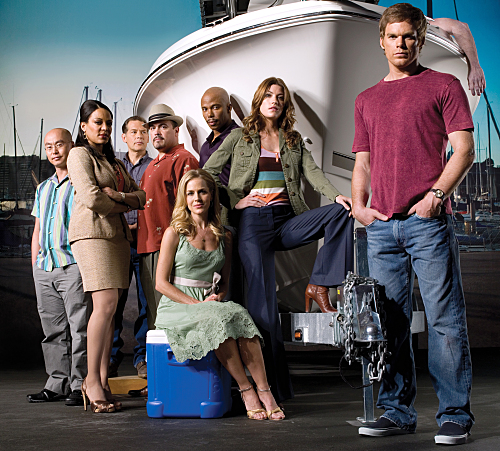 It’s fun to think of “Resistance is Futile” from Doakes’ perspective.  He’s spent years feeling like the last sane man in Miami PD, the only one able to recognize what a “creep” that Morgan in forensics is.  Dexter proves him right with some manipulation and a headbutt but no one else will believe him.  Now, with his career on the line, Doakes has proof that will exonerate him and break open the biggest serial killer case in history.  Only now the killer’s gotten his hands on the evidence, and used it to frame Doakes for the murder!  The only option James has left is to bring him in alone.

Doakes is like the hero of some cheesy action/thriller; unwarranted searches, calling in favors from shady characters, smuggling.  It’s that’s enough to make me forgive how clichéd his phone call to Laguertta is, “I have to do this all… you meant a lot to me…”  James isn’t just the hero in his own mind, he’s clearly one by any sane moral standard.  It’s a testament to just how thoroughly this series has enmeshed us in its own moral universe that we don’t see things that way.

Dexter is the hero here, despite all the very good reasons that he shouldn’t be.  Even if you’re one of those people who claim to want him to get caught (stop kidding yourself, BTW) you need to recognize that Doakes is an obstacle for Dexter to overcome, no vice-versa.  Their confrontation on the dock really highlights this.  Doakes’ perception of the situation is radically different from Dexter’s and the audience’s:

We can forgive James his shock, we’ve been in the know a lot longer than he has, but he also interprets this as some sort of redemptive moment for his life and career.  We see it as the thing Dexter’s been worried about all episode; that Jimenez would lead to his exposure.

We also know that Dexter’s not going to meekly accept capture.  The first rule is don’t get caught and Doakes stands in the way of that.  If James understood this he’d have triple-tapped Dexter the moment he saw him.  Instead, he tries to complete his own narrative by bringing the villain in alive.  Sadly (for him) Dexter doesn’t follow the script.  We can see the struggle for the gun and it’s outcome coming a mile off because we know that this is Dexter.  James doesn’t realize until it’s too late that he isn’t living in the Doakes Show.

Dexter’s apology to Rita is another of those great moments where we see Dex demonstrate his humanity.  He has no hope of reconciliation, he’s merely trying to express his feelings to someone he cares about.

Lilah’s stalker routine fell a little flat for me.  At this point she seems more like an annoyance than a genuine threat.  There’s just too much intensity elsewhere on the series.

The scene where Dexter thinks he’s been caught is one of those espically great ones that make TV worth watching.  I love that his first impulse is to try to comfort Deb.

This entry was posted in Dexter, Season 2, Television Review and tagged Dexter, Resistance is Futile, s2e09. Bookmark the permalink.