I Have Been Broken and Humiliated

Can I see your spine trophies?

Illyria’s a hard character to write about, given the relatively short time we’ve had to get to know her.  It’s tempting to try to chart some continuity between her and Fred and while I don’t deny that this might be there, it isn’t really how I understand the character.  It’s equally tempting to simply slot her into Angel’s redemption paradigm; she’s a being who once did incalculable evil and, after some mystical intervention, doesn’t anymore.  But Illyria’s crimes don’t seem to weigh on her in the slightest and there’s no design for vengeance or punishment in her fall; it’s simply a consequence of her existing in this place and time.  Why then, does she fight for the good guys?  There are multiple possible explanations (see Fred continuity) but, for me, Illyria speaks to the transformative (rather than moral) aspect of redemption; Illyria must become something other than what she was not because it’s “right” but because it’s the only way to live in this world.  That’s certainly present in the rest of the characters’ quests for redemption but, for Illyria, it’s the only reason.  Her motives aren’t moral, they’re a desperate search for agency. END_OF_DOCUMENT_TOKEN_TO_BE_REPLACED

I Will Not Accept a Lie

“There is nothing that I want” was nearly the title of this post.  An understated summation of the bleakest of mindsets, delivered with complete conviction and full of bitterness that falls just short of self-pity; it’s the perfect Wesley line.  Except that it’s not.  Much as I think of latter-season Wes as an uncompromising badass with a penchant for self-destruction, that’s not how he makes his exit.  Deathbed repentance would seem to be the ultimate cheat for a character so committed to being miserable, but Wesley and Fred’s farewell capitalizes on the shows themes of redemption and forgiveness and delivers an emotional closure that feels entirely earned. END_OF_DOCUMENT_TOKEN_TO_BE_REPLACED

Spike’s slice of “Not Fade Away” is probably its most disappointing one.  Things are fine as far as they go, and I’m certainly pleased about the way he chose to spend his last day, but there’s not a lot of insight into the character here.  That shouldn’t be too much of a surprise; Spike’s arc stumbled once he got his body back, staggered once Lindsey’s deception was revealed, and stalled completely in his bogus journey to Italy.  Expecting <1/8 of an episode fix that is unreasonable.  We need to settle for confirmation of what we already knew: much as Spike’s grown, he’s still figuring out who he is. END_OF_DOCUMENT_TOKEN_TO_BE_REPLACED

What If You Found Out That None of it Matters? 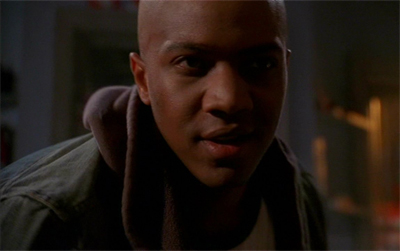 Vampires don’t provide as much security as you’d think

I’ve said for most of Angel’s run that Charles Gunn was a good character in need of a good story.  Ever the valuable supporting playing, he also invariably stumbled anytime the spotlight found him.  I’d say “careful what you wish for,” but Gunn’s pain this season is our gain.  Like most great stories (and great Whedon stories in particular), Gunn’s involves making the protagonist suffer; not that Gunn hadn’t suffered before, but a vamped sister we never knew and a failed relationship we never cared about weren’t the most resonant of threads.  All of the “just the muscle” whining finally paid big dividends this season and it was fitting that the finale brought the character back to his roots. END_OF_DOCUMENT_TOKEN_TO_BE_REPLACED

It’s Not My Kind of Work Anymore 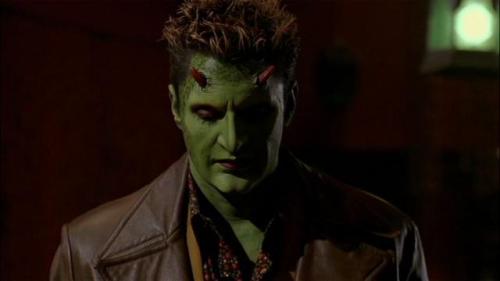 Angel sure can use a friend

I heard somewhere (the director’s commentary?) that the original plan was for Lorne to sing “Over the Rainbow” during his “last day” segment but it fell through due to rights/money issues.  Much as I appreciate the bittersweet second choice of “If I Ruled the World,” I can’t help but bemoan how perfect the first option would’ve been.  Season two’s final arc is one best forgotten, but callbacks are always welcome in finales and, much as we might’ve hated it, Pylea was the most extended concentrated look at Lorne we’ve ever received.  More importantly, the song would’ve brought home the most important element of Lorne’s character:  for him, our world is OZ; a wondrous, magical place where anything can happen.  Earth offers Lorne more than he ever dreamed possible, a fact that goes a long way to explaining his sunny disposition and near-bottomless tolerance.  Contrasted with this, his exit from the series is all the more tragic and enough to make me hate Angel just a little. END_OF_DOCUMENT_TOKEN_TO_BE_REPLACED

You’re Not Part of the Solution, Lindsey 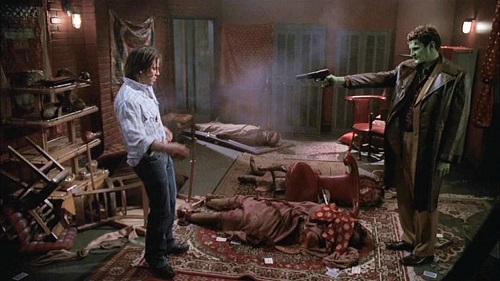 Bet you weren’t expecting me to start with Mr. McDonald, huh?  While Lindsey was, at best, under-utilized this season and, at worst, superfluous, his role in the finale is still critical to how I understand this series.  Angel had many foils over the show’s run but Lindsey worked best because he wasn’t “evil.”  Selfish, callous, and power-hungry?  Sure, but Lindsey never enjoyed the work he did for Wolfram & Hart, even turned on the firm when it went “too far.”  Lindsey was a basically good person trying to get ahead in a bad world.  It’s why the firm wanted him so badly.  It’s why he had to die. END_OF_DOCUMENT_TOKEN_TO_BE_REPLACED

“Power Play” is the perfect episode at the perfect time.  Beyond being a masterful lead-in to the events of “Not Fade Away,” Angel’s penultimate episode is a great story in its own right and more than enough to get the audience re-invested after last week’s unpleasantness (let us never speak of it again).  What really sells this episode for me is the way it’s able to make us doubt our champion.  We never really believe that Angel’s gone over to the dark side (I’m not sure that we’re meant to) but it’s abundantly clear that something’s wrong with him and figuring out what that is makes for a compelling piece of television. END_OF_DOCUMENT_TOKEN_TO_BE_REPLACED 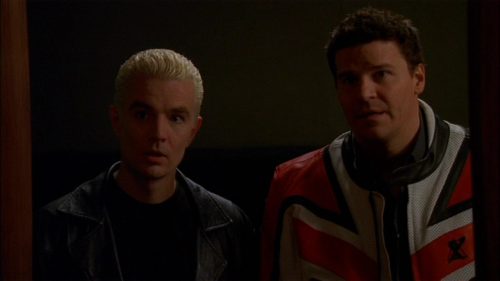 No, why would Buffy be here? We wouldn’t want to mess with such an awesome episode.

Well, here we are, the last crappy episode of Angel.  I tend to Google episodes before writing about them (it’s a good way to gain perspective) and I was shocked to discover that “The Girl in Question” has its defenders.  I just don’t get how anyone could like this episode.  Having a comedic departure at a time when the series should be building momentum was ill advised to begin with but, if you’re going to do it, don’t forget the “comedic” part.  Even if we put aside the bafflingly placement in the season and the equally baffling bait and switch of not getting to see Buffy, we’re still left with an episode where the overwhelming majority of the jokes don’t land.  The quality of the Angel & Spike’s bogus journey hovers somewhere around the series’ first season, and that’s just inexcusable at this juncture. END_OF_DOCUMENT_TOKEN_TO_BE_REPLACED

Serve no master but your own ambition

So, just how did you spot me?

“Time Bomb” is a solid episode, dovetailing an advance of Illyria’s arc while neatly resolving some of the lingering problems she presented.  As an antagonist, Illyria was great; after brutally murdering Fred she’s established as a remorseless demon lord with godlike strength and intelligence, the ability to manipulate time and space, and possibly talk to plants.  She was someone we were definitely interested in seeing our heroes fight.  But, with the fight over, where does she fit?  That’s the central question of Illyria and what makes her such an interesting character but the things that made her a great villain also make her integration with the team impossible.  This story is about very human heroes; it’s not big enough for a god, so how can Illyria remain a part of it? END_OF_DOCUMENT_TOKEN_TO_BE_REPLACED

You gotta do what you can to protect your family

The face of intimidation

I really like “Origin.”  That seems somewhat strange considering I’ve always been a fan of (or at least apologist for) Angel’s son and this episode presents a Connor that’s almost unrecognizable.  At its worst, Connor’s presto-chango journey to mental health is a complete cheat, a way to avoid dealing with the baggage of season four and write-out an unpopular character to boot.  There’s a lot of truth to that but “Origin” proves the series isn’t quite willing to dispense with consequence altogether.  The best part of Connor, in my opinion, was his relationship with Angel and this episode is far from an easy out in that respect. END_OF_DOCUMENT_TOKEN_TO_BE_REPLACED